Back to Parent Page
HomeQ&AHow Do Brain Cells Communicate? 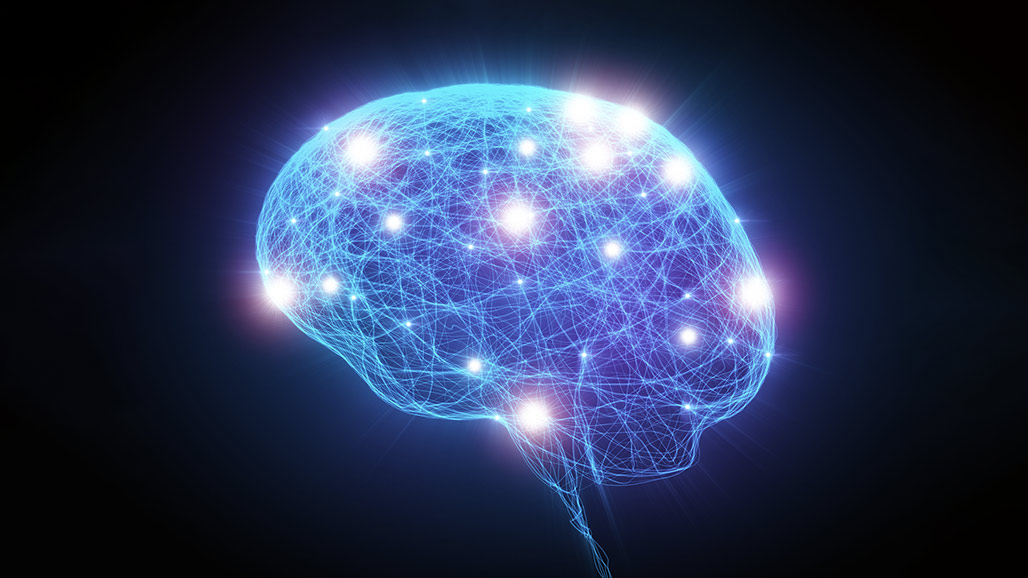 How do brain cells communicate with one another to produce thoughts, feelings, and behavior?

They signal to one another using a process called neurotransmission. But the transmission of these important chemical messages could not occur without unique cellular structures called receptors.

In recent years, researchers have learned that receptors are just as important as neurotransmitters in maintaining a healthy brain. In fact, studies have demonstrated that receptors play an important role in mood, learning, and social bonds. Receptors also mediate structural plasticity, or remodeling of brain circuits that may result in changes to the number and type of synapses.

What is a receptor? 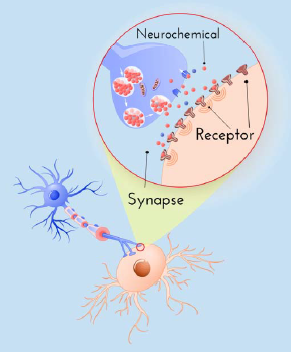 Given the catch metaphor, you may be picturing a ball glove hanging off the side of a neuron. But a receptor is simply a protein that resides on the membrane of a brain cell. In the past, some have described receptors as a form of neurobiological lock. When a key, or the neurochemical, binds with the lock, the neuron then reads the signal and makes its response by continuing, slowing, or stopping the signal. But most locks only take a single, specific key. Receptors aren’t quite so picky.

While neuroscientists initially hypothesized that a particular receptor would only bind with single neurotransmitter, current research shows that is not the case. A single neurotransmitter may bind with a variety of different receptors. Furthermore, other neurochemicals, including hormones and small proteins called neuropeptides, can also bind with receptors. If you could look at just a single synapse, you are likely to see hundreds of molecules being thrown and caught between cells and receptors at any given moment.

How do receptors work?

There are many different receptors–and what type of receptor determines how a “catch” can influence cell signaling. For example, some receptors, called ionotropic receptors, open special channels on the cell membrane called ligand-gated ion channels. Ionotropic receptors work very quickly, telling the cell to open or close those channels. When they are opened, it helps to propagate the signal to the next cell. When they are closed, they tell the cell to slow down signaling or stop the signal altogether.

As neurotransmitters bind with a receptor, they may also activate what neuroscientists call “second messengers.” These are enzymes and proteins inside the receiving cell—and they can also open or block ion channels, create new ion channels, or tell the cell’s DNA to start producing new proteins.

What do receptors have to do with behavior?

Receptors are a critical component of long-term potentiation (LTP), the molecular process that leads to learning and memory. You can think of LTP as a continuous, steadfast game of signaling catch between brain cells. This persistent activity strengthens the synapse, leading to a long-lasting increase of signal strength between a neuron and its neighbor. Receptors must be able to catch the right neurochemicals for this kind of enduring process to occur. Researchers now understand that LTP is required for learning—and, consequently, the formation of memories.

What do receptors have to do with disease?

Quite a bit, actually. Many receptor genes have been linked to elevated risk for disorders like schizophrenia, depression, and anxiety. And that makes sense–these genetic variants can lead to having too many or too few of a given receptor in different regions of the brain.

When that occurs, it can throw off the entire process, leading to signaling anomalies across key circuits and, ultimately, neuropsychiatric disease.

Take depression and bipolar disorder, for example. If you have a genetic variant that changes the density of receptors in brain regions associated with mood, those receptors take up too much serotonin, an important neurotransmitter best known as a natural mood stabilizer. This can lead to depressive symptoms. Drugs like selective serotonin reuptake inhibitors (SSRIs), a common form of antidepressant medication, can help to alleviate those symptoms, at least in part, by leaving serotonin in the synapse longer.

Similarly, research has shown that receptors are linked to neurodegenerative disorders like Alzheimer’s, Parkinson’s, and Huntington’s diseases. When specific receptors take up too much glutamate, a neurotransmitter known for exciting neurons to help pass messages between cells, it can set off a cascade of neurobiological events that result in changes to synapses as well as cell death—which leads to the type of cell losses so often observed in neurodegenerative disease.

Finally, receptors have also been linked to drug addiction. Too few receptors for a neurotransmitter called dopamine can result in an imbalance in the brain’s reward center, the basal ganglia. When individuals take a drug of abuse, whether it’s nicotine or heroin, dopamine is released in response. If there are not enough receptors, much of that neurotransmitter will remain in the synapse, making the drugs seem more rewarding. That, in turn, could lead to more drug use, and, over time, addiction, as this excess of dopamine makes subtle changes to the reward circuitry.