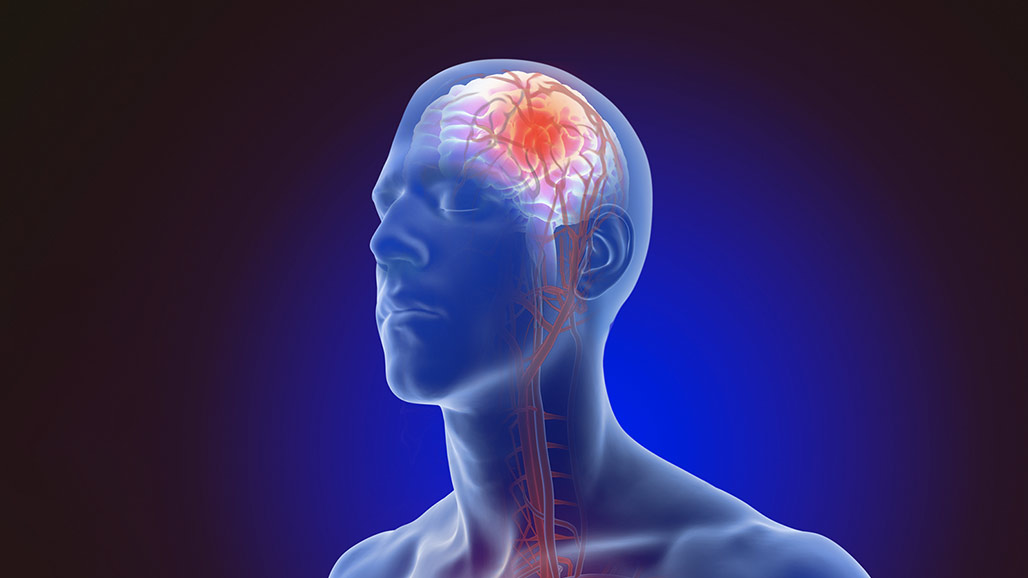 A stroke, disrupted circulation that kills brain tissue, can leave neurological impairments including paralysis, partial or total loss of language, and severe cognitive deficits. In the United States, stroke is the fifth leading cause of death.

Although strokes are sudden, the brain injury they inflict typically evolves over the course of hours or even days. Prompt, effective treatment can mean the difference between a good recovery and disability or death.

What Is a Stroke? 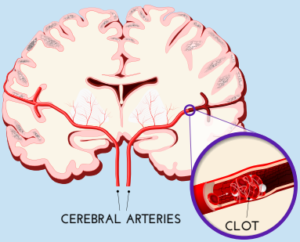 Ischemic strokes, which occur when blood flow to part of the brain is blocked by a clot, are most common, accounting for 80 percent of the total.

The clot may originate in the heart (cardioembolic stroke), often due to disturbed heart rhythm, and travel through the bloodstream to lodge in a cerebral artery. Or it may result from atherosclerosis—a clot breaks off from arterial plaques of fatty material within or outside the brain. Atherosclerosis can also narrow brain arteries, making them more vulnerable to blockage.

The effects of stroke depend on where blockage occurs and the size of the blocked artery. A clot on one side of the brain may cause weakness, paralysis, or sensory loss on the opposite side of the body, and possibly loss of speech. If it occurs in an artery supplying the back of the brain, dizziness, memory loss, and gait and swallowing disturbances are frequent. Obstructing a small artery deep in the brain, a lacunar stroke, typically has more limited consequences.

Without enough glucose and oxygen for energy, the neuron cannot maintain chemical equilibrium, and excessive calcium and sodium enter the cell body. This triggers the release of excitatory neurotransmitters, which allow more positive ions in.

Disruptions in the function of mitochondria, energy producing parts of the cell, and breakdown in the blood-brain barrier apparently play a central role. 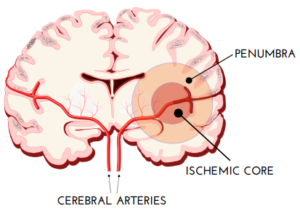 Neurons in the area where blood supply is cut off nearly completely (the ischemic core) succumb in minutes. But in a broader zone of moderately impaired circulation (the penumbra) they may malfunction but survive for days, returning to normal if blood supply is restored quickly enough.

The damage inflicted by hemorrhagic stroke is less well understood.

Processes set in motion by hemorrhage can aggravate the injury in subsequent hours and days. The chemical thrombin, produced by the body to form clots and stop the bleeding, is toxic in large quantities. It promotes edema, which raises pressure further. Red blood cells within the hematoma break down and release iron, worsening edema and injuring brain cells by oxidation.

After subarachnoid hemorrhage, the pressure of the hematoma and edema can trigger vasospasm, blood vessel constriction that produces ischemia in the brain weeks after the initial stroke.

Ischemic and hemorrhagic stroke have similar symptoms but need very different treatment, and the first necessity is distinguishing between them by CT scan or magnetic resonance imaging (MRI).

During an ischemic stroke, restoring blood flow can prevent permanent brain damage within the penumbra, and even revive cells in the ischemic core. Within the first four and a half hours after symptoms start, intravenous tissue plasminogen activator (tPA), can dissolve the clot.

After four and a half but before six hours, tPA administered directly to the brain through an artery can still be helpful. Within 24 hours, physical removal of the clot may limit brain injury.

Immediate treatment of a hemorrhagic stroke is largely supportive—maintain respiration and other vital functions—and a matter of keeping blood pressure down to prevent further bleeding.

In someone who had been taking an anticoagulant (such as Coumadin), treatment includes vitamin K or drugs to reverse the anticoagulant’s action. After subarachnoid hemorrhage, a calcium channel blocker (a drug that relaxes arteries) can forestall vasospasm.

Depending on the location of the hematoma and the degree of edema, surgery may be used to relieve pressure by drilling a hole through the skull or placing a shunt to drain fluid.

Prevention is better than the best treatment. High blood pressure is a powerful risk factor for both kinds of stroke. Reduce it (ideally to 120/80mmHg), with a healthy lifestyle and medication if necessary.