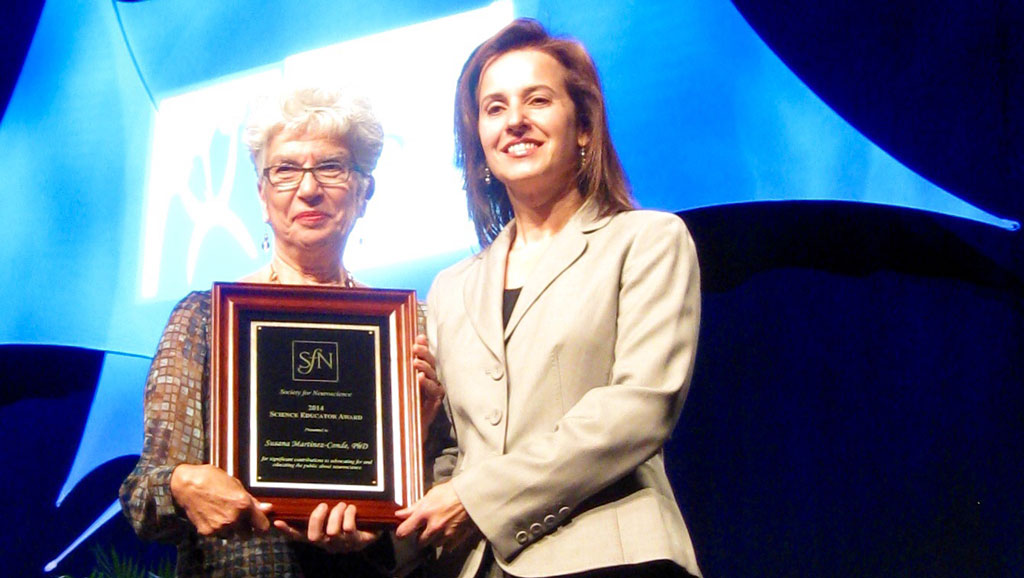 The Society for Neuroscience (SfN) awarded its Science Educator Award to Susana Martinez-Conde, PhD, of the State University of New York (SUNY) Downstate Medical Center. SfN President Carol Mason presented her the award on Saturday during the group’s annual meeting, in Washington, DC. This is the first year the Dana Foundation has sponsored this award.

I met Dr. Martinez-Conde last month, when she was a panelist at an eye-opening event on the science behind illusions. Visual experience and other illusions are the subject of her research and a popular-science book, Sleights of Mind: What the Neuroscience of Magic Reveals about Our Everyday Deceptions, written with her co-investigator and husband Stephen L. Macknik. They also write the popular Illusions column for Scientific American. Their close collaboration with top professional illusionists like James (The Amazing) Randi, Mac King, and Teller started at a conference they organized in 2007, but we spoke about an earlier conference, where her ideas for outreach started to grow.

Q: Was it a conscious decision of yours to do a lot of education and outreach, as well as research?

Susana Martinez-Conde: I would say that it kind of started as an accident. But it has been so rewarding at all levels, personally and professionally.

In 2004, I was organizing the annual European Conference on Visual Perception, which was to be held in my home city of A Coruña, in Spain. Growing up there, I think, had to do with why I’m interested in science education today. Even now, it’s a relatively small city, less than 300,000 people, but it has a very large concentration of science museums. And it has one of the first interactive museums, the Casa de las Ciencias, the Home of Sciences. The director, Ramón Núñez Centella at the time, was a major influence in science education and outreach in Spain. For me, it was a five minute walk from where I lived.

So as I was organizing this conference in my home town, I thought it would be nice to extend it, and include some public outreach. So I contacted Mr. Núñez and we established a collaboration with, at the time, the three science museums of the city. We held events that were open for the public at some of these museums.

We also had the idea to hold a contest for “The Best Illusion of the Year.” It was supposed to have been a one‑time event, but the public reception and the academic community reception were just so huge that we decided to make this an annual event.

For outreach, do you prefer writing, or do you like talking to people better?

Something that I’ve been particularly interested in, that seems to be a call, as a Spanish speaking person, is I’ve participated in a number of outreach initiatives to the Hispanic and Spanish speaking community. I’ve written recent articles for magazines such as  Latino Perspectives. I’ve also written some articles for children’s science magazines. Steve and I guest edited a special issue of Odyssey magazine, on magic and science, which is for ages 10 to 16.

This was a very cool experience, because we got to see all the articles submitted and basically designed the issue. I had thought previously about the connection between magic and neuroscience, but this was a wider perspective: the magic and all sciences. You realize that magic is also wonderful too to talk about mathematics and chemistry and physics. It’s such a good hook to get people interested in the sciences as a whole.

Q: How important is it to you to do outreach now?

A: I think there’s a great need for female roles in science as well, and I have experienced myself, that there’s a difficulty, there’s a lack of female role models in the media. When I have an opportunity, I’m going to take it, because I know this is a major problem.

I was having lunch with an editor of a science magazine, and she mentioned that TV producers had come to them and asked them, “OK, let us know more about your male authors.” They were specifically looking for male authors of books to portray on TV as opposed to just any authors. I have had similar experiences.

I’ve been pretty shocked about it, but it’s still there. It’s very prominent in the media, this bias towards that. If your target audience is 30 to 50-year-old males, then the role models that you’re going to present are going to be in that demographic. That’s not necessarily the way that science is done, and it kind of becomes its own feedback loop that makes it very hard to break with the stereotypes. I do feel that these days I have a responsibility to serve when I can as a role model to young women who may be interested in getting into science but are facing some of these difficulties.

A:  Unfortunately no. Growing up, I didn’t really have any female or male models, for that matter. I think that I was a little of an outlier in that sense. For a while I was a little bit lost. I knew that I wanted to be a scientist, but I really didn’t know how to go about it, what I should do, how to get into it, so it was a bit of a trial and error at the beginning that worked for me, but I definitely didn’t know what I was getting into or how to go about it at least for the first few years.

Over the years I have mentored students from postdoctoral fellows to graduate students, undergrads, and high school students. I have been very pleased, and here is just one story. A year or two ago one high school student, Veronica, came to my laboratory initially for a summer and then then stayed on, coming in the evenings and weekends during her junior and senior year of high school. She was a very bright student, and gained early admission to Harvard Medical School. And she published a peer reviewed paper as first author from her research project in my lab.