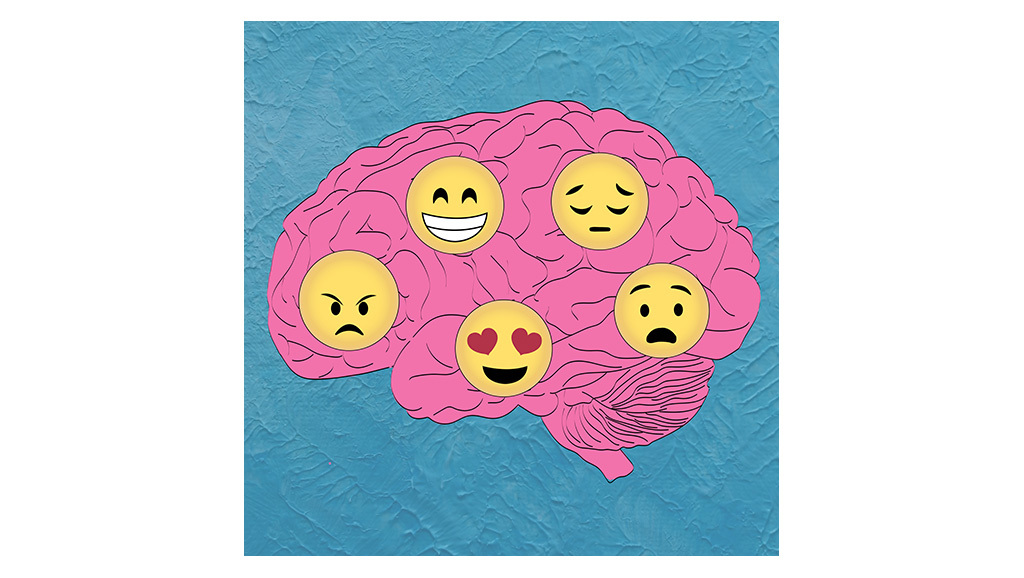 Humans are likely the most emotionally regulated creatures on earth. Compared to other animal species, we can modulate and modify emotional reactions and experiences, even very intense ones, through a large and sophisticated emotion regulation repertoire that includes skills of distraction, reappraisal, language, prediction, social interaction, suppression, and more.1-5 At times, these skills require effort, and at other times, they seem reflexive and automatic.

Evolutionarily speaking, this slow development of emotion regulation ability in childhood that culminates in an exquisite ability in adulthood points to the benefits of a slow-maturing emotion regulation system. Indeed, humans are not only a highly emotionally regulated species, but they are slowly developing in general, relative to other species, 6 with a prolonged period of immaturity. Phylogenetically, slow development may confer benefits through an extended period of neural plasticity—a feature of a developing neural system that heightens its ability to learn from the environment. If so, then humans may owe their sophisticated emotion regulation skills to the “extension” of childhood that has evolved in us.

The nature, chronicity, and quality of environmental inputs during these periods of plasticity, in particular those from close relationships (e.g., parents, friends, teachers), in large part determine emotion regulation functioning in adulthood.7 Thus, adult brain and behavioral function in this regard can be conceptualized as a historical reflection of what was experienced during development. To fully appreciate individual differences in adult emotion regulation skills, then, it is helpful to understand how the brain develops. 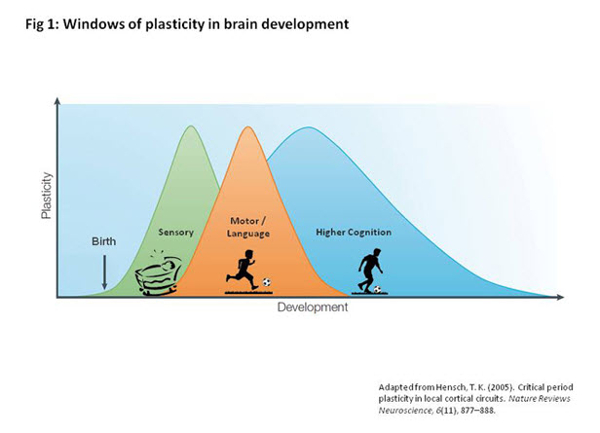 While it is probably fair to say that much of the brain contributes in some form or another to emotion regulation, at its core the processes rely on communication between areas of the prefrontal cortex, in particular medial regions and subcortical systems including the amygdala, hippocampus, and basal ganglia. 8-10 The medial prefrontal cortex (mPFC) includes association cortex (meaning that it can synthesize incoming information from multiple sources) and has strong bidirectional connections, which typically occur via a single synapse, 11-14 to and from subcortical regions. The mPFC receives and coordinates signals from  perceptual, semantic, and linguistic regions of the brain as well,  to facilitate regulation—e.g. amplification, redirection, or dampening—of  emotional reactions.5

This complex neurobiological interstate takes years to reach maturity. It is often the case that slow developing systems are highly susceptible to environmental pressures; that is, they exhibit a high degree of plasticity. In a given neural system’s development, there is a moment when it is particularly sensitive to the environment—a so-called sensitive period. The brain undergoes multiple sensitive periods, a different one for each neural circuit, and taken together such intervals span development. Sensitive periods, and their less-forgiving cousins, critical periods, have been studied more often in perceptual systems (e.g., vision) than in emotion regulation. Thus, we will illustrate the properties of sensitive periods with an example from vision development. Then we will discuss how these principles may apply to emotion regulation.

The Nobel prize-winning work of Hubel and Wiesel15 demonstrated that a window of heightened brain plasticity opens in the early days of a cat’s visual system; during this window, environmental input (i.e., light) leaves an enduring influence on the visual cortex and associated visual behavior (i.e., binocular vision) that is impossible to reverse once the critical period terminates. That is, once the window of heightened plasticity closes (i.e., the cat becomes older), the developing system is no longer modifiable by light.

More recently, this pioneering work has been extended in rodent models to reveal the molecular mechanisms that give rise to the opening and closing of these windows of plasticity.16,17 This research identified core cellular and molecular mechanisms, highlighting the central role of shifting inhibitory and excitatory neurotransmitter input balances (e.g., GABA and glutamate) across development. In addition, it discovered the environmental means through which sensitive periods themselves might be altered, in terms of timing, duration, and magnitude.7 It suggested,  in other words, that the nature of the sensitive periods themselves might be plastic and modifiable by early experiences (e.g., sensory deprivation, high exposure to video games, maternal depression7).

Such periods of heightened plasticity (and the accompanying rapid learning) have been identified in humans. For example, using clever behavioral studies with preverbal infants, researchers have discovered that within the first six months of postnatal life, the infant’s auditory system becomes attuned to the sounds (i.e. phonemes) that are meaningful in the language to which the infant is exposed. 18,19 Similar effects have been identified in human face recognition.20

The latter is what we might expect from very slow-maturing regions of the brain, such as the prefrontal cortex. Indeed, a  large volume of literature spanning the past two decades has demonstrated that developmental change in this region continues well into adulthood, both structurally and functionally,21-24 far outpaced by perceptual systems25,26 and lower subcortical structures, including those involved in emotional learning.27-32 This pattern reflects the hierarchical nature of development, the process whereby a system’s functioning depends upon the prior maturation of other systems.

The slow development of emotion regulation is paralleled by the slow development of the neurobiology that supports it (e.g., the amygdala and mPFC). Prolonged age-related change in prefrontal cortex and subcortical connectivity has been demonstrated both by structural and functional connectivity measures. 27,31-38 Several studies have shown that communication between mPFC and the amygdala, which supports emotional learning and arousal, is qualitatively different in childhood than in adulthood (even though continued quantitative change is observed throughout adolescence and young adulthood). Specifically, in adulthood (but not earlier), increases in mPFC activity are associated with a decrease in the amygdala’s activity— these two regions are anti-correlated with each other in response to emotional stimuli (such as fear faces).

This anti-correlation, which has been supported by more invasive studies involving lesions in the brain,39 is interpreted to reflect mPFC regulation of the amygdala in healthy adulthood—i.e., top-down information flow from mPFC to amygdala. Unsurprisingly, adults who typically exhibit this pattern of anti-correlated amygdala and mPFC communication in response to emotional cues are those with better emotion regulation. On average, children do not show this adult-like pattern, but instead, a child-specific one. 27,37,40,41

This child-specific pattern is a compelling argument for a sensitive period in the development of connections between the amygdala and mPFC. One should note that It can be quite challenging to definitively identify sensitive periods in humans, because our period of development takes so long, posing considerable difficulties in experimental control and design. This is where translation from animal studies becomes necessary. For example, the period between weaning and puberty has emerged as the sensitive period for mPFC-amygdala connections in the rodent. 42 Precise tracing and optogenetic studies have shown that amygdala-to-mPFC connections develop earlier than regulatory connections in the opposite direction.43-46 Consequently, the neurobiology of emotion regulation differs qualitatively between late infancy and adolescence—where the adolescent rat uses the mPFC for regulating emotion, the infant does not.47

Similar findings have been observed in human fMRI studies.48 The connections between mPFC and amygdala exhibit massive development during the post-weaning/pre-pubertal period, and the boundaries of this change are marked by drastic shifts in the excitatory/inhibitory balance—the molecular hallmark of sensitive period opening/closure. 43 Moreover, stimuli (e.g., music) learned during this juvenile period have enduring consequences on mPFC-amygdala function observed throughout adulthood, and this learning must occur during a sensitive period.42 In 2016, Laurel Gabard-Durnam and others showed that in humans, the nature of the coactivation of mPFC and amygdala in response to environmental stimuli predicts the development of future functioning most strongly when it is measured in childhood.

Taken together, non-human and human research has established that the young animal (rodent or human) does not use the mPFC for emotion regulation in the way that the mature one does. Nonetheless, young animals can exhibit regulated emotional behavior. So how is the young animal accomplishing this task?

While the infant rat displays some forms of emotion regulation (for example, extinguishing a learned fear), the nature of the behavior is starkly different from the adult.47 For an animal dependent on an adult for survival, there is a species-expectation that the attachment figure will be available. This caregiver can serve as an external social regulator at a time of mPFC immaturity. Indeed, the behavioral literature has noted across decades of empirical work that the young child relies on the parent in just this way, using various strategies.

Another mechanism by which parents can regulate emotions is through modulation of stress reactivity and fear learning. Evidence for parental buffering has been identified across various species, including rats, guinea pigs, monkeys, and now humans.54-56 Researchers have found that there are sensitive periods in development when access to parental cues provides a powerful external means of emotion regulation. As has been described extensively in other sources,54,57,58 stimuli related to a (regulated) parent can modulate a physiological response to threat, namely that parental cues can dampen elevations in the stress hormone cortisol (in humans) and corticosterone (in rats).59-61

Parental cues have also been shown to decrease amygdala activity in both humans 55 and in rats.60 For example, in the developing rodent, this reduction of amygdala activity by the parent prevents threat learning. That is, the presence of parental cues prevents the developing rat from learning to associate a threatening stimulus with a cue (e.g., a tone or a light). Conversely, when a parent expresses defensive behaviors or heightened negative affect, the rodent work has shown that such cues are quite effective in amplifying amygdala reactivity.62 Emerging research in humans has also demonstrated that parental cues are effective in reducing amygdala activity.55 Taken together, these studies show that during a time of relative mPFC immaturity, the parent can serve as an external regulator of subcortical arousal. Moreover, the effect of parental cues not only provides instruction to prefrontal cortex development, but may also contribute to the high degree of plasticity observed in this region.63,64

We now know that the prefrontal cortex is one of the last brain regions to develop, and its connections with other cortical and subcortical targets are very slow to form. These processes are especially slow in the human, and evidence of continued development has been documented through adolescence and adulthood. This slow-paced and sustained development renders the prefrontal cortex and its connections vulnerable to environmental insults (e.g., early psychosocial adversity), but at the same time offers great potential for extensive learning from positive, enriching environments, and the optimization of neural processes that will facilitate regulated behavior. Its end-product is an incredibly rich emotional regulation repertoire in the mature adult.