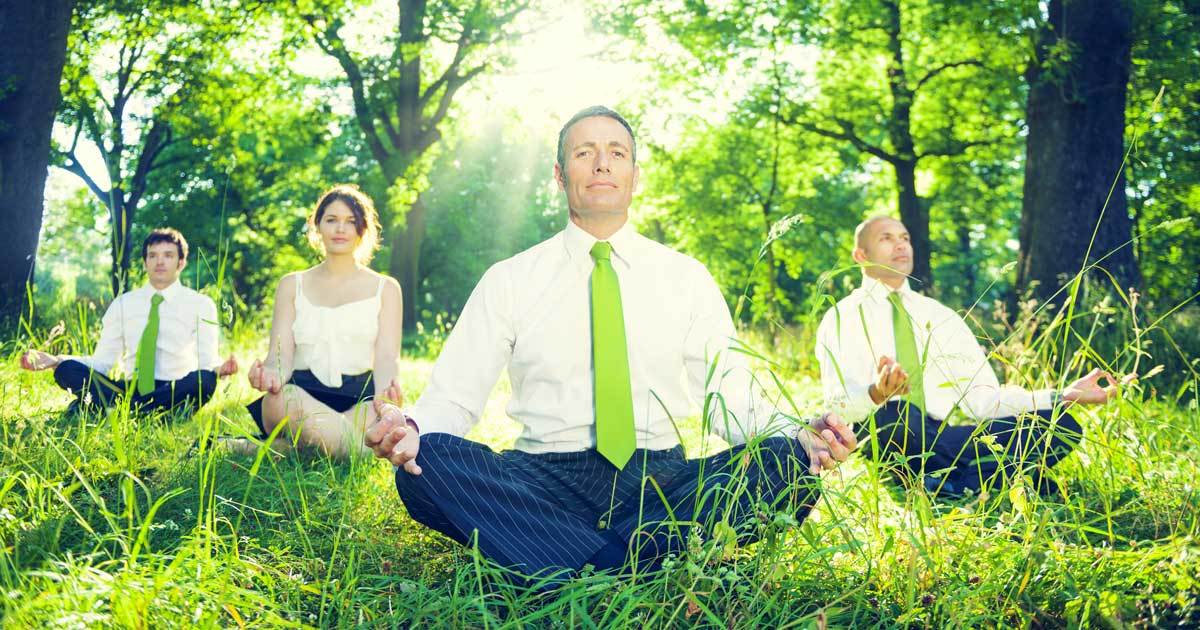 When the Beatles went to India to study transcendental meditation at a remote ashram in 1968, meditation was still largely seen in the West as a cultish fad favored by celebrities and hippies. Fifty years later, meditation has gone mainstream.

Mindfulness-based meditation is now firmly established as a valid stress-reduction tool backed by a growing body of solid science illuminating its effects on the brain, behavior, and health. It is being applied to an ever-growing list of life situations and disorders, from keeping kindergarteners calm and boosting job satisfaction to overcoming depression and back pain. Along the way it has become big business, for better or worse: the “meditation market” is currently estimated at about $1.5 billion, fueled by rapid growth in meditation apps, books, DVDs, studios, and high-end retreats. Mindfulness has clearly captured the attention of science–and capitalism.

The idea that such a seemingly simple practice as mindful breathing–the method essentially boils down to sitting still, focusing on the present moment, and bringing attention to the breath (or a mantra or object, in some variations)–can alter the structure of the brain and improve health has helped propel interest in meditation. Like many booming trends based on emerging science, the claimed benefits of mindfulness practices sometimes run ahead of the science.

What’s clear is that meditation changes the brain in a number of ways, some of them now well-characterized. Less clear is how those brain changes translate to improvements in health or disease, how much of a “dose” of meditation is needed, or how long the benefits last, among other questions. A looming challenge for the field is how to best apply mindfulness practices to solve real-world problems in schools, homes, and workplaces and, perhaps more importantly, to harness the power of meditation to treat psychiatric symptoms.

Despite its burgeoning popularity–an estimated 9.3 million practitioners in the US alone–rigorous scientific investigation of meditation is still in its infancy. Very few studies have gauged its long-term effects. The most robust longitudinal data is in chronic pain, the condition to which Jon-Kabat Zinn, Ph.D., the grandfather of mindfulness, first applied his brand of mindfulness-based stress reduction in 1979. Two dozen studies and 1,500 patients later, the practice shows clear benefits in symptom relief for fibromyalgia, migraine, chronic pelvic pain, and most recently, low back pain. Mindfulness meditation seems to enable people to decouple pain sensations from emotional distress, possibly through changes in how brain systems react to sensory processing.

In recent years, clinical research investigating applications of meditation to psychiatric disorders has blossomed, as a recent review underscores. Arguably the most studied condition is depression. A series of randomized controlled clinical trials found that mindfulness-based cognitive therapy (MBCT), a hybrid of mindfulness meditation and cognitive behavioral therapy (CBT), was equivalent to the “gold-standard” treatment of CBT alone and even to antidepressant drugs. MBCT was effective at treating current depression and reducing the risk of relapse. The mechanism is less clear but may be related to meditation’s ability to reduce repetitive negative thinking and improve emotion regulation, hallmark behavioral changes seen in multiple studies.

Promising clinical results have also been reported in substance use, including alcohol, drug, opioid, and nicotine dependency, and in anxiety disorders, where imaging studies have identified changes in brain activity suggesting increased “top-down” cortical regulation of emotional control and reactivity. Emerging evidence suggests mindfulness may also be useful in treating attention deficit hyperactivity disorder, post-traumatic stress disorder, some eating disorders, and possibly even serious psychiatric conditions such as psychosis and bipolar disorder, though the clinical evidence is less robust in these areas.

In an interview, Richard Davidson, Ph.D., director of the Center for Healthy Minds at the University of Wisconsin, Madison, characterized the data in psychiatric disorders as “quite encouraging” even though in most cases mindfulness training was comparable to–not better or worse than–established evidence-based therapies. “Unlike a lot of other kinds of treatment, meditation is something that can be done anywhere, anytime,” he says. “You don’t need anything special; you don’t need to be with a therapist or take a medication, and it does not have long-term [negative] consequences. So in the longer run, meditation may be particularly efficacious, particularly with certain subgroups of patients.”

Understanding who benefits most from meditation, and why is the next frontier in this work, Davidson says. His center is focused on developing digital platforms to disseminate mindfulness practices widely, while collecting data remotely. They hope to “begin to answer the question of how we can better tailor practices to an individual’s cognitive and emotional style,” which will be determined as part of a thorough baseline evaluation. Essentially, he envisions a mobile app along the lines of Headspace or Calm, two popular meditation apps for smartphones, but with scientifically grounded mechanisms for measuring the impact of the practices over time.

The effects of mindfulness practices in healthy populations are much less clear, because rigorous long-term studies are so few. Nonetheless, businesses, schools, healthcare facilities, even prisons, are jumping on the mindfulness bandwagon. A survey of US businesses cited in a 2017 Fortune article found that half of all employers were likely to offer mindfulness training to their employees. The commodification of meditation by capitalism–particularly businesses using it to increase worker productivity and improve profitability–is controversial, as author David Forbes chronicles in his recent book, Mindfulness and Its Discontents.

In the education sector, there has been a push to train teachers to incorporate mindfulness practices into classrooms from preschool to university level. A few pilot studies have shown positive benefits among students and teachers, but rigorous longitudinal studies that objectively evaluate the enduring effects of school-based mindfulness are rare. The U.K.-based Wellcome Trust has completed enrollment for the largest investigation yet of mindfulness in schools. The seven-year longitudinal study involves 7,000 11- to 16-year-olds and will include brain scans on 600 of the students to examine how the teenage brain changes with meditation practice and how those changes relate to the individual’s well-being and risk of mental health disorders. Davidson’s center has just completed a US Department of Education-funded three-year randomized, controlled trial of mindfulness among 700 fourth and fifth graders in Madison public schools. Davidson said in an interview that the findings are in line with a pilot study testing the so-called “kindness curriculum,” which found greater levels of sharing and cooperation as well as improvements in attention and executive control measures among children trained in practices emphasizing mindfulness, gratitude, and kindness.

From a neuroscience perspective, the attraction to apply mindfulness to education stems from how the practice changes the brain. Meditation seems to particularly influence two major brain systems: attention and emotion. Greater self-regulation of these systems enables focused attention without distraction and the capacity to exercise control over emotional impulses. Recent research, using diffusion tensor imaging (DTI), a brain-imaging technique that measures the integrity of white matter connections, has focused on how mindfulness practices influence the connectivity among and within these circuits. The emerging results show a mixed bag of changes. A recent study, for example, found greater activity in some regions, but reduced connectivity in others, particularly those related to self-referential thinking.

A consistent finding of multiple studies is that important pathways connecting the prefrontal cortex to emotional regions in the brain appear to be strengthened by meditation, says Dana Alliance for Brain Initiatives member Michael Posner, Ph.D., professor emeritus of psychology at the University of Oregon, who has spent his career studying the attention system. Posner and others have used DTI to show that meditation alters white matter tracts around the anterior cingulate, a central brain hub for attentional and emotion regulation.

In the last few years, despite formal retirement, Posner has turned his attention to unraveling how that occurs. “I was trying to find an explanation for how meditation could change white matter,” he said in an interview. Posner focused on the common finding that meditation induces low-frequency theta brain rhythms (a brain-wave pattern defined as 1-8 cycles per second as recorded on EEG) in frontal brain regions. This particular pattern of nerve-cell firing is known to trigger an enzyme that activates dormant oligodendrocytes, the precursor glial cells that make myelin, the fatty sheath that envelops axons. (Myelin is what makes white matter white.) He hypothesized that this meditation-induced theta rhythm was behind the white matter changes he and others were finding in meditators.

Posner worked with the Niell laboratory at the University of Oregon to replicate these changes in a mouse model. Using optogenetics, a technique in which laser pulses are used to turn genetically modified neurons on and off at will, the researchers induced theta rhythms directly in anterior cingulate neurons–essentially putting mice into a meditative state for 30 minutes a day for one month–then characterized the white matter changes around the anterior cingulate. They found that the theta rhythms indeed activated dormant oligodendrocytes, which in turn increased myelination and improved connectivity in white matter pathways surrounding the anterior cingulate. Behavioral testing also showed reduced anxiety in the treated mice. The team went on to confirm and expand the initial findings using high-resolution microscopy to quantify the changes in myelination in the mouse brain following the induction of theta-rhythm.

This is an elegant example of how science takes behavioral observations, such as increased attentiveness following mindfulness training, and tracks it backward: first to the brain circuit that is involved (attention-regulation network), next to the type of change within that circuit (improved white-matter integrity), and then to the specific mechanism underlying the change (theta rhythm-induced activation of myelin-forming cells).

Posner believes the findings provide a plausible mechanism through which meditation can improve brain connectivity. He has now turned back to studying humans and is using a form of noninvasive brain stimulation (transcranial alternating current stimulation) at theta frequencies to improve white matter connectivity in specific brain circuits. This work is ongoing; preliminary results suggest the stimulation successfully improves synaptic connections in targeted areas.

These findings shed light on the underlying neural mechanisms by which meditation elicits the behavioral effects that are observed in practitioners, illuminating scientific understanding. Knowing how meditation works is nice, but not essential–in the same way that science still doesn’t understand how aspirin or antidepressants work. “The mechanism is really important for scientific curiosity, but it has no bearing on the practical import of this work,” argues Davidson. “We can bring this work to the world and deploy it in a real-world setting without fully understanding the detailed mechanisms.”

A Good Habit to Have?

The fact that meditation affects white matter connectivity underscores the hope that these practices can induce beneficial brain changes, particularly in children whose brains are highly plastic. Because behavioral habits (good or bad) can strongly influence the brain’s “wiring-up,” especially in developing brains, meditation offers great potential for positively impacting the neural circuitry of attention and emotion regulation. The earlier one starts, the thinking goes, the more beneficial meditation may be.

“The intention of our work in schools is that kids will learn simple practices that will become lifetime habits and be incorporated into their daily life as part of their personal hygiene,” says Davidson. “We envision a time when these kinds of things would be as common as brushing your teeth twice a day.”