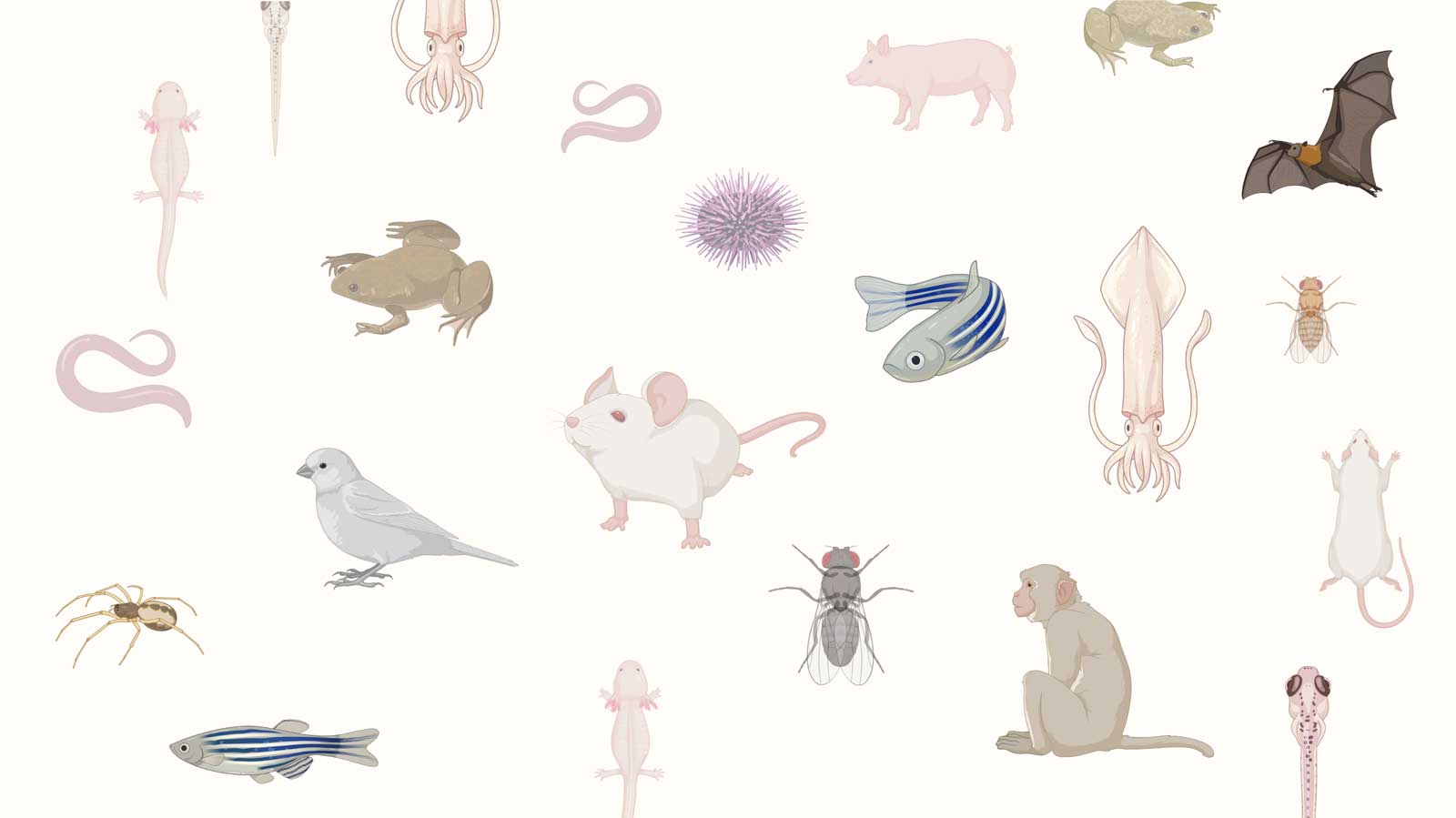 Understanding the brain is challenging: It’s tough to understand what may be going on under our thick skulls. But over the past century, experimental work using animal models has given us many insights into the molecules, genes, cells, and fibrous networks that make up the central nervous system.

What are animal models?

As we strive to better understand how the brain works, as well as how different brain-related diseases may arise, it is important to conduct experiments. While scientists have learned a good deal about the brain from posthumous study, dissecting the human brain after death, these methods cannot tell us what the brain is doing in life. To better understand both the physiology of the central nervous system and the different processes that allow it produce thoughts, feelings, and movements, many scientists rely on animal models.

Animal models are built upon the idea that many species of animals have a behavior or disease similar to one seen in humans. Scientists rely on C. elegans worms, fruit flies, rodents, non-human primates, and other types of animals to understand different aspects of brain function and behavior. It is important to understand that an animal model is not just the animal studied—it also includes the type of scientific methodology used. For example, many neuroscientists use an animal model called a transgenic mouse, or a mouse that has been genetically modified in specific ways. While the mouse is the animal involved in their experiments, the process of making changes to its genome and seeing how it affects the brain is just as important to the model as the animal itself.

Why can’t we just study the human brain instead of using animal models?

We can—but only to a limited extent. Scientists use non-invasive methods like EEGs, which record brain activity using electrodes placed on the scalp, and neuroimaging techniques like positron emission tomography (PET) and functional magnetic resonance imaging (fMRI), which measure the changes in blood flow that occur during different activities. Researchers can use transcranial magnetic stimulation (TMS) and transcranial direct current stimulation (tDCS) to stimulate the brain to increase or decrease neural activity to see if it results in any changes in cognition or behavior. Scientists also have learned about how the brain works by doing basic research with volunteer patients who have to have their skulls opened for brain surgery, but that research is very limited and brief to protect the health and well-being of those patients.  To study brain activity over longer periods of time and  in greater depth requires methods that are far too risky for human test subjects, and so some researchers use animal models. Given that our brains govern our every thought, feeling, and behavior, and the information we learn could help people with brain disorders and diseases to heal, studying the brain in more in-depth is a worthy goal.

What have we learned from animal models?

There are too many findings to list! Most of the drugs currently on the market used to treat different neuropsychiatric diseases were born from studies first done in animal models. Animal models showed scientists  that neural signaling is electrical in nature. in fact, pioneering neuroscientists Alan Hodgkin and Andrew Huxley relied on squid brains to characterize the action potential, the basic process by which a neuron releases neurotransmitters to send messages to neighboring cells.

Fruit flies helped neuroscientists first understand that the brain is plastic, or able to adapt, in response to the environment. Frog neurons helped us to understand how the brain sends signals to the muscles to make them move. Watching fruit bats teach one another to vocalize has given us ideas about how babies learn to speak. We can thank rodents for our knowledge of the brain’s different short-term and long-term memory systems and how they interact. And other species have also provided insights into the brain areas and neurotransmitters involved in addiction, depression, and schizophrenia.

What are the limitations of animal models?

Scientists use different animal models depending on the experimental questions they are asking: If they are studying genetics, anatomy, or behavior, they want to use a model that mimics humans in that respect. But the same genetic differences that allowed you to develop into a human being as opposed to a rodent mean it’s rare that you’ll find a 1:1 translation of any animal-brain-related findings. There are differences—sometimes big, sometimes small.

For example, while we have learned a lot about human speech by studying birds’ songs, not every single brain mechanism or specific aspect of behavior in bird song will be comparable to humans. Nor will aspects of sleep-wake cycles in spiders exactly follow the same pattern that we see in adults, though we have learned a lot about how these cycles work in general by studying spiders’ days. These similarities can provide new insights about how the nervous system works as well as raise new questions scientists should ask.

How does what we learn in an animal model get translated into human experiments?

Once scientists identify a gene, molecule, or process of interest, they can translate that finding into human experiments in a variety of ways. Pharmaceutical companies that have identified a particular protein or molecule might start Phase I trials to test a potential new treatment for a particular disease. Academic researchers may use neuroimaging or techniques like TMS to see whether a particular discovery holds true in humans. There is no one-size-fits-all approach, but scientists are looking for results that “converge,” meaning that the phenomenon they see in an animal model can also be observed or measured in the human brain. The journey from the “bench to the bedside” takes a long time and involves a lot of methodical experimental work.

But it can be done! For example, rodent and non-human primate models helped researchers understand that the symptoms seen in Parkinson’s disease were driven by the neurodegeneration of brain cells that release a neurotransmitter called dopamine in a part of the brain called the substantia nigra. Following on that discovery, scientists learned that some of those symptoms, especially the tremors and slowness of movement, could be helped when those animals were given a drug that led to increased production of dopamine. Eventually, on the foundation of that animal research, pharmaceutical companies developed a drug called Levadopa, or L-dopa. This drug, called a dopamine precursor, is converted into dopamine when it crosses the blood-brain barrier, increasing the amount of this vital neurotransmitter in human brains and helping people with Parkinson’s move more easily.

How does the NIH ensure animal welfare? – US National Institutes of Health

Why animals are vital to brain research – BrainFacts.org (part of the Society for Neuroscience)