Back to Parent Page
HomeArticlesJoining Neuroscience with Society 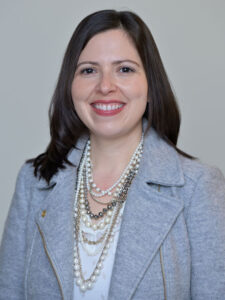 Khara Ramos, Ph.D., joined the Foundation this month, after serving as the inaugural director of the neuroethics program within the National Institute of Neurological Disorders and Stroke (NINDS, part of the National Institutes of Health) and leading the neuroscience content and strategy branch of NINDS’s communications office. Dr. Ramos was instrumental in establishing the rapid growth of neuroethics efforts for the NIH BRAIN Initiative, positioning the NIH as a global leader in the developing field of neuroethics. As our inaugural vice president of neuroscience & society, Dr. Ramos will launch and oversee programs that advance the intersections of neuroscience with areas such as ethics, law, humanities, arts, and public engagement. We asked her about the transition, where she sees brain science impacting society lately, and more.

Q: In 2015, you were part of the core team at NIH that established the ambitious BRAIN Initiative project, and you took the lead on integrating neuroethics into its goals and methods. What was it like, building out a new area that crossed so many departments in a governmental agency like NIH?

Dr. Ramos: It was an amazing and exciting opportunity, especially because it was such a perfect fit for my interests. I became interested in neuroscience when I was an undergrad in a seminar on consciousness—how does the biology of brain function produce our experiences of ourselves and our interactions with people in the world around us? And I really kind of came full circle with my job at NIH because that’s the heart of what the BRAIN Initiative is all about.

A research agency like NIH spends many billions of dollars of taxpayer money a year on this incredibly important biomedical research. I think the tendency, when thinking about science and society in that kind of context, is to focus on how society supports and enables science, which is very important. But I got really interested in thinking about the flip side of that: What does neuroscience owe to society?

I was able to thread that perspective throughout the whole BRAIN Initiative. It was really exciting because it was brand-new and we had a lot of momentum, all the way from President Obama down through the different layers of the federal agencies. There was this sense that we were starting this flagship neuroscience effort, and being able to say, this is my job to work with this network of amazing, smart, dedicated people trying to advance brain science for a better future—that was awesome.

And it quickly became clear to me how much NIH as a whole needed that kind of a focus on neuroethics. It started with the BRAIN Initiative, but it didn’t take long before we were thinking of neuroethics for all of neuroscience at NIH. And I think that’s great, though still a work in progress. I’m optimistic that it will continue. NIH spends more money on neuroscience research than any other major category of biomedical research—it’s about $10 billion a year—so that’s a lot of associated social implications to consider. Thinking about those things in a publicly funded agency gave me a very strong sense of responsibility to do the right thing and always remember why we’re doing the work. And not just nose to the grindstone, doing experiments every day, but bigger picture, why are we doing this?

Did you hit any snags when trying to engage the researchers and department heads connected with NIH in such big-picture discussion?

Unfortunately, neuroethics has kind of a branding problem. People have different definitions of the term, which is certainly valid. My vision of neuroethics is that it’s about people working together to ensure that neuroscience supports human flourishing. It’s hard for me to understand why a neuroscientist wouldn’t be excited about that, but I think when people hear the word ethics, there is this perception that we’re talking about regulating or “policing” science.

I really try to think of neuroethics as an opportunity to maximize the utility of neuroscience for good outcomes. But what does that mean in practice? How do you try to implement that through, for example, an agency that funds biomedical research?

When I was starting to lay out the ethical, legal, societal, and cultural pieces for the BRAIN Initiative, it wasn’t even a given that the legal implications were something we should consider. People would ask, “Is that even within the scope of the NIH?” And my response was always that the NIH’s Genome Institute, which already had developed a strong ethics program (ELSI) included it—it’s the L in ELSI. Their work helped inform the passage of what we call GINA, the Genetic Information Nondiscrimination Act in the US.

In your roles at NIH, you’ve been part of collaborations among government, business (especially tech), and non-governmental organizations. What role do these collaborations play?

These cross-sectoral partnerships are essential for integrating science and society. Having had the opportunity to be part of some of that work (including the BRAIN Initiative Alliance and the International Brain Initiative), I learned that those partnerships work best when the partners involved understand what each partner can and can’t do (legally, technically), in order to leverage complementary strengths.

This is really at the heart of why I decided to move from government to a nonprofit. I think there is a critical role for nonprofits in bridging the gap between science and society in a way that funding agencies just aren’t well equipped to do. Let NIH fund neuroscience research and Dana Foundation and other philanthropic science organizations can work to contextualize that research within society in a complementary way.

What are some areas of neuroscience you think are important to pay attention to right now, in terms of their ethical and societal implications?

One is all the work being done right now to model normal brain function or create reference datasets and brain atlases. We need to take care about whose data go in these datasets and how and who gets to decide what “normal” is. We know there’s a lot of diversity in human functioning, and that humanity has a track record of not being very thoughtful about acknowledging and including all types of people. We need to be humble about the limits of what we can actually say about differences in the brain.

A second area is brain organoids. Not the hyped coverage that often pops up about how they’re “mini-brains” that are going to become sentient—that’s not going to happen anytime soon—but for their potential in individualized models of brain functioning. People are already interested in using these as models of brain development for specific disease targets, for instance, to model certain types of epilepsy.

A third area is a more-fundamental issue. Rather than a specific area of science, how can we build multidisciplinary communities of scholars who can work with the public to explore these kinds of questions—the ethical, legal, societal, cultural implications of neuroscience—deeply and carefully? The piece of this that I don’t think really exists yet, at least in the US, is mechanisms for these discussions to then feed back to and inform the neuroscience research itself. We have models of citizen engagement, but I have been reading papers that suggest that last step, closing the loop back to inform the research and policy, doesn’t necessarily happen. So that’s certainly something that I’m going to be focusing on.

So, you’ll be moving to New York City, to work with us in person, later this year. What are you most looking forward to in New York?

I think the idea of being a New Yorker is awesome. I have a list of cities that I would love to live in at some point in my life—New York, Paris, Seoul. I love the energy that comes from a big city. So, the museums, the shows, the food—and I really want to try to run the NYC marathon one year. So yeah, I’m excited.