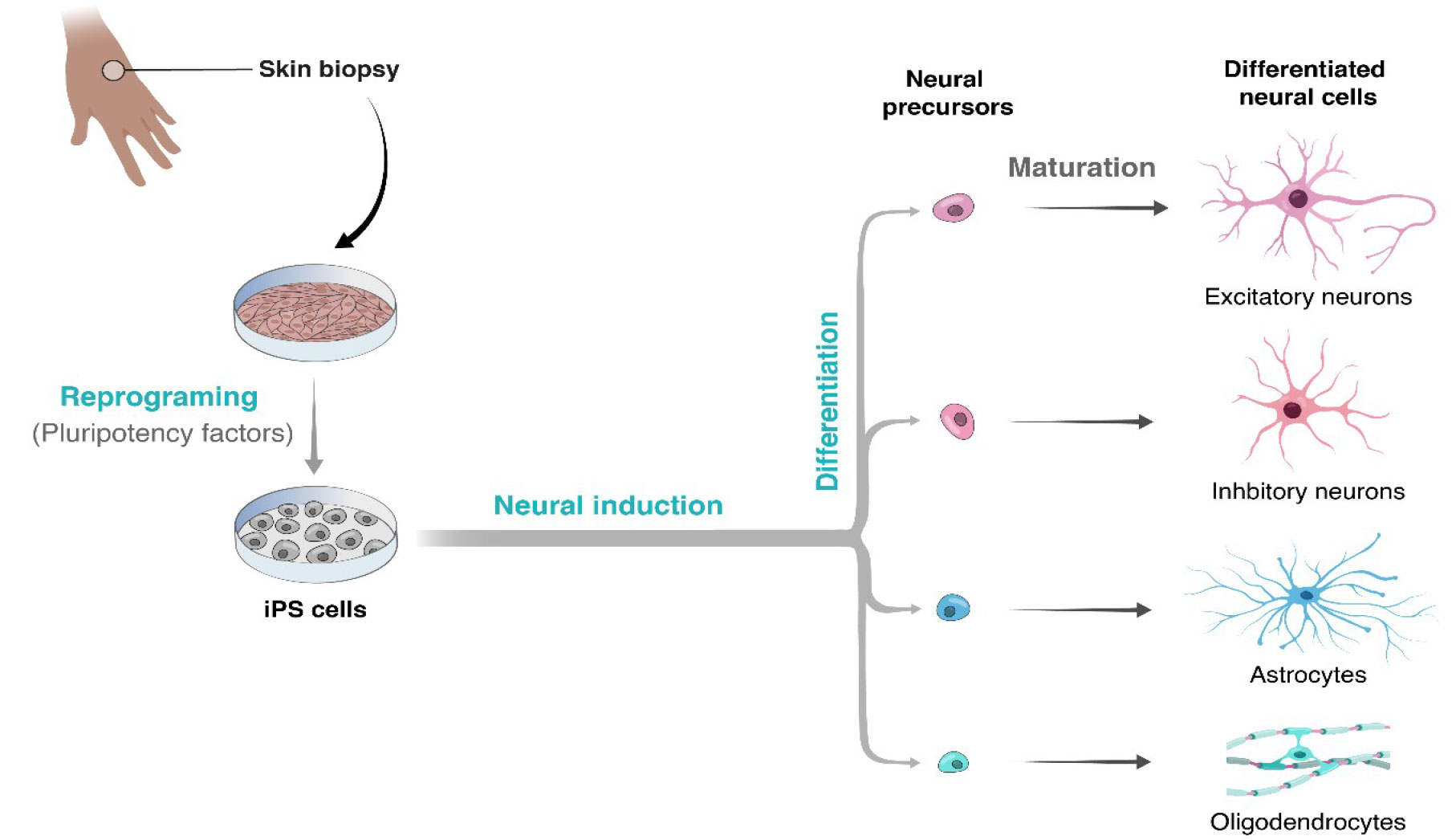 Induced pluripotent stem cells (iPSCs) are developed from adult skin fibroblast cells. They can be kept alive and multiplied in a lab dish, and treated with different compounds to differentiate into neural progenitor cells. These progenitors then can be induced to differentiate into specific neural cell types in single-layer cultures or multilayer organoids or transplanted into host animals. Undifferentiated iPSCs can also be injected into a blastocyst to generate chimeras. All images used with permission of National Academies Press, from its report “The Emerging Field of Human Neural Organoids, Transplants, and Chimeras.” (link below)

For more than a century, our understanding of the human brain has been largely based on animal models. Long before the first electroencephalograms (EEG) and neuroimaging methods were invented, scientists relied on the fruit fly, C. elegans (roundworm), zebrafish, birds, rodents, and a host of non-human primates to study how the brain gives rise to sensation, perception, movement, emotion, and behavior. These models, still widely in use today, have given us great insight into the inner workings of brain cells and circuits, as well as knowledge about how brain-related disorders may develop.

But animal models cannot answer all of our questions about the human brain. Our brains, after all, are the very things that set us most apart from other species, and because of the natural differences between humans and other animals, we cannot be sure the findings from traditional animal models wholly apply to us.

Recent advances in technology now allow scientists to use a tiny amount of human brain cells and tissues in a variety of new brain models, in lab dishes and sometimes in other animals. These new models include organoids, transplants, and chimeras. Using human cells helps overcome the limitations of traditional animal models and capture more of the unique neurobiological information that governs the human brain’s inner workings both in health and in disease. Along with the potential of such models to further our knowledge of neuroscience come many ethical questions: How, where, when, and why should they be used? These questions will deepen as the technologies used to build these models become more sophisticated and the length of time the models can survive grows longer.

Why are these new brain research models better than standard animal models?

Scientists use different animal models depending on the experimental questions they are asking. They want to use a model that is similar to humans in terms of genetics, anatomy, or physiology. But the same genetic differences that allowed you to develop into a human being as opposed to a rodent mean it’s rare that you’ll find a 1:1 translation of any brain-related findings. There are differences, sometimes big, sometimes small, that mean the mechanisms behind some aspect behavior in bird song, for example, won’t be completely analogous to speech in humans. (see Brain Basics: Understanding Animal Models).

Brain research models instead use induced pluripotent stem cells (iPSCs). These are human cells, usually skin or blood cells, that can be reprogrammed back to an immature state so that scientists can then direct them to develop into neurons or other kinds of important brain-related cells. This allows scientists to better investigate the specific human aspects of brain development, function, and disease. For example, by taking an iPSC developed from cells donated by a person with a specific brain disorder such as schizophrenia or autism, researchers might be able to track differences in early brain development and highlight processes that may have gone awry, or test potential treatments to see whether they work.

What is a human neural organoid model?

Organoids are tiny clumps brain tissue grown from iPSCs. Scientists put the immature iPSCs into a culture (lab dish with nutrients) that allows them to organize themselves into three-dimensional neural circuits. The resulting 4-to-5-millimeter pieces of tissue mimic how different parts of the brain might develop in the womb, showing scientists how different brain cells come together and communicate as the brain grows.

What is a human neural transplant model?

Scientists insert a few human stem cells into the adult brains of other animals to study how neurons, glia, and other cells behave while the animal is navigating its environment. In this way, researchers can better understand how specific behaviors, like feeding or moving, may change genetic processes as well as how the human cells function in response to sensory information from the outside world.

What is a human neural chimera model?

In this model, researchers transplant stem cells into an animal, usually a rodent, very early in development–while that animal is still an embryo. The cells will grow and multiply along with the animal’s own cells, allowing scientists to study the genetics and function of different development processes as the brain grows. This works for transplanting mice iPSCs into mice; it currently is not possible to generate viable neural chimeras of human cells in any animal.

Why do scientists want to talk about the ethics of human neural models’ use now?

These models are quite new, and while, at first read, they may seem like something out of a science fiction novel, in reality, today’s models remain relatively simple. But as technology advances, these models are expected to become much more complex. The cells may grow for days or weeks rather than hours, or scientists may learn how to insert more than one type of cell into a model.

These future potentials raise important questions. For example, are the people who donate their skin or blood cells to make iPSCs fully aware of how they will be used? Have they given consent to this new use? How are scientists making sure to properly care for the animals that are used for these models – especially if, as the models evolve, an animal may develop symptoms of the human disease that researchers are studying?

There is also the question of whether these models might result in new abilities. Could an organoid or chimera develop a human-like consciousness? Might they become sophisticated enough to  experience pain? Could the human cells implanted in a transplant or chimera lead to significant changes to behavior – or even give the animals enhanced problem-solving or language abilities?

While researchers and ethicists and science policymakers think they can answer these questions about the models of today, they’re not as sure about tomorrow. That’s why they, as well as organizations like the National Institutes of Health and other research institutions, all agree it is important that scientists, philosophers, theologians, legal experts, and ethicists consider the potential moral, ethical, and religious concerns about these models, so guidelines can be put in place for how they are used in the future.